This piece discusses the topic of self-injury in detail. Please use your discretion.

The second hand on the clock clicked too loudly, a drumbeat marching me towards my impending doom. Class ended and other students gathered their notes while I lagged behind, resigned to my fate. I had made a lesser-of-two-evils deal with the devil and my day of reckoning had arrived. My professor picked up his laptop and walked across the hall to his office. A few minutes later, my friend and I followed.

My professor’s door was open, so my friend rapped on its black metal frame and unceremoniously declared with a sweeping gesture in my direction,

“She has something she needs to tell you.”

Sitting behind his desk, my professor stared at me with his head cocked and eyebrows raised, waiting for some sort of explanation. I realized I was at the point of no return and paused for a moment before stepping into his office. Overstuffed bookshelves lined his walls and the smell of freshly brewed coffee hung in the air. I closed the door as he motioned me towards a seat I had taken many times before. Perching on its edge nervously, I kept my left arm folded against my body like a broken wing. I prayed for the earth to split in two and swallow me whole, but nothing happened. My heart pounded and throbbed in my ears. I wondered if he could hear it too.

Planting my eyes on my shoes, I took a deep breath and said in a waterfall of words,

“I cut myself and I think it might be infected and I don’t know what to do and I can’t go to the hospital or tell anyone so here I am.”

Heavy silence filled the room. I smiled weakly and raised my eyes to meet his, trying to assess the damage I had just done to my image as “The Girl Who Has It Together.” My entire existence revolved around my performance of that part, and the world was my stage. I had hidden my self-injury for years, and I learned how to present myself so that no one would suspect that the honors student on track to graduate early was also hiding in her car in the darkened corner of the parking lot at night to injure in private. And, I was mostly successful. My parents and friends and my professor bought the perfect-for-consumption version of myself I sold. 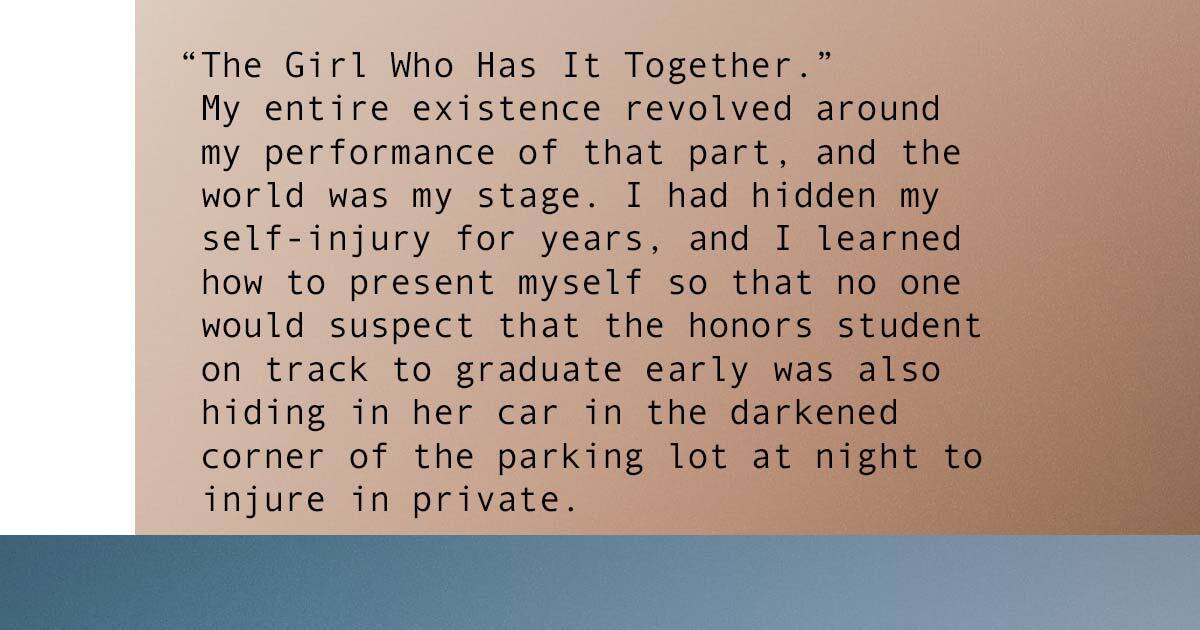 He had joined the faculty my freshman year, and it was by chance I ended up in his Old and New Testament classes. Twice, I found myself on trips he led to the Amazon Basin of Peru, where we sat in huts lit only by candles and the stars as he told stories about his troubled teenage years and helped me parse irregular Greek verbs. I babysat his children, and my friends and I helped him move when he bought a house across town. I knew him well, which meant I had everything to lose.

His chair groaned as he leaned forward, and I shared its sentiment. I stiffened in anticipation of the tidal wave of judgment that was sure to wash over me, but it never came. His eyes became soft as he searched my face.

To show him was dangerous and terrifying and went against my every instinct for self-preservation. It was asking me to jump into shark-infested waters without a cage. I was sure I was going to be eaten alive.

I hesitated, and he sensed my internal debate.

With a nod and a sigh, I scooted towards the desk until my knees were pressed into its hard, mahogany face. Bending my elbow to keep my forearm hidden from his view until the last possible second, I tugged the sleeve of my sweatshirt up. I took one final look hoping, by some miracle, the injury would look better than it had an hour before. It didn’t. Pain radiated up my arm as I unfolded it out towards him, a broken offering.

He reached out and tenderly cradled my arm suspended in mid-air. I studied his face for any sign of disgust or disappointment or disillusionment. None came. He peered at the wound, feeling it with the back of his hand as he asked a few questions. I didn’t respond; I couldn’t force myself to utter a single syllable. Every shred of bravado I possessed had disappeared, and all that was left was the deep shame I had been living with as my constant companion. That shame was the voice in my head and the reason in my heart and the feeling in my gut. I thought it was my birthright and my inheritance and my penance, and now my professor was in on the secret. The thought nearly broke me.

I watched him scan the rest of my arm, tracing the map of raised, angry scars with his fingertips.

He lifted his eyes, filled with tears, to mine and asked, “These other lines, did you do that too?”

My face flooded red, betraying me. It was enough to give him the answer he sought.

With a slow, knowing nod, he released my arm. I jerked it away, shoving my sleeve down to hide the marks. He sat back in his chair, his eyes never leaving my face. I squirmed in my seat, uncomfortable under his scrutiny and unsure what to do in this new space where he knew the very worst thing about me.

I steeled myself and braced for his anger or an outpouring of condemnation. It would have been no match for the litany of defensive responses I had stowed away for just such an occasion. Instead, though, he wiped his eyes and whispered my name. It sounded like a sorrow-filled question, like a heartbroken embrace, and it caught me off-guard. The genuineness in his voice took the wind out of my sails.

A lump rose in my throat, and I found all sorts of other places to look—the stacks of papers covering his desk, the books piled precariously on the edge of the window sill, my hands that had started trembling from exposure and embarrassment and guilt.

My professor waited patiently until I found the courage to meet his gaze again and said with a quiver in his voice,

“This doesn’t change anything.”

You are worthy of love and grace, from others and yourself. You are enough, here and now. If you’re dealing with self-injury or self-harm, we encourage you to use TWLOHA’s FIND HELP Tool to locate professional help and to read more stories like this one here. If you reside outside of the US, please browse our growing International Resources database. You can also text TWLOHA to 741741 to be connected for free, 24/7 to a trained Crisis Text Line counselor. If it’s encouragement or a listening ear that you need, email our team at [email protected].