Note: This piece talks about thoughts of suicide.

“To realize that you are not your thoughts is when you begin to awaken spiritually.” – Eckhart Tolle

Have you ever thought, “Dying would be so much easier than living”?

This is hard to admit, but as of recently, I have. I don’t care to romanticize death, however, its immediate offering of ceasing sure sounds peaceful. Especially in this world, a world of noise, cyclical conflict, dwindling empathy, and a plethora of egos—mine included.

This past spring, as I was driving to the place all beings in the midst of an existential crisis should go—New York City—a thought popped into my head. There were no warning signs preceding it, not even a single tear or a catastrophic personal failure to inspire its inception. It arose seemingly out of thin air (and brain matter):

“You should swerve off this bridge.”

The thought was truly silly—even if it felt anything but—considering the car was moving at about 20 mph due to traffic (New York City, remember) and there was a sturdy, concrete barrier blocking the edge to boot—but still, the thought came. Illogical and downright alarming.

On a personal level, I’m not familiar with suicidal thoughts. By trade, I certainly am. As TWLOHA’s Editor for the last five years, I’ve read, shared, listened to, and worked on stories and lived experiences about suicidal ideation—so many heartbreaking and courageously vulnerable real-life moments. But this, for me, just Becky, was uncharted territory. It stunned me.

Sadness. How could I not feel sad? Suicide is tragic. Not wanting to live is heartbreaking and scary. Two other emotions accompanied the deep sadness: isolation and empathy. I felt alone, as though I was floating, unattached to a single thing through space. (Which was ironic considering I was inching closer and closer, mile by mile to the most populous city in the US.) And through that isolation came empathy. So much empathy for all the people I had previously connected with who had or were still dealing with these thoughts on the regular. For my cousin who lost her fight to these thoughts just months before.

Shame. This can’t be happening. I’m “well adjusted,” I’m safe and secure, I work for a damn mental health organization. How is this even possible?

Once I reached my destination, a friend’s apartment in Harlem, I hoped the gnawing pressure in my stomach would subside. I hoped I would “snap out of it.” Much to my dismay, I didn’t. The thought and the confusion, sadness, and shame latching onto it, sat inside me, around me, and on top of me—taunting and relentless. 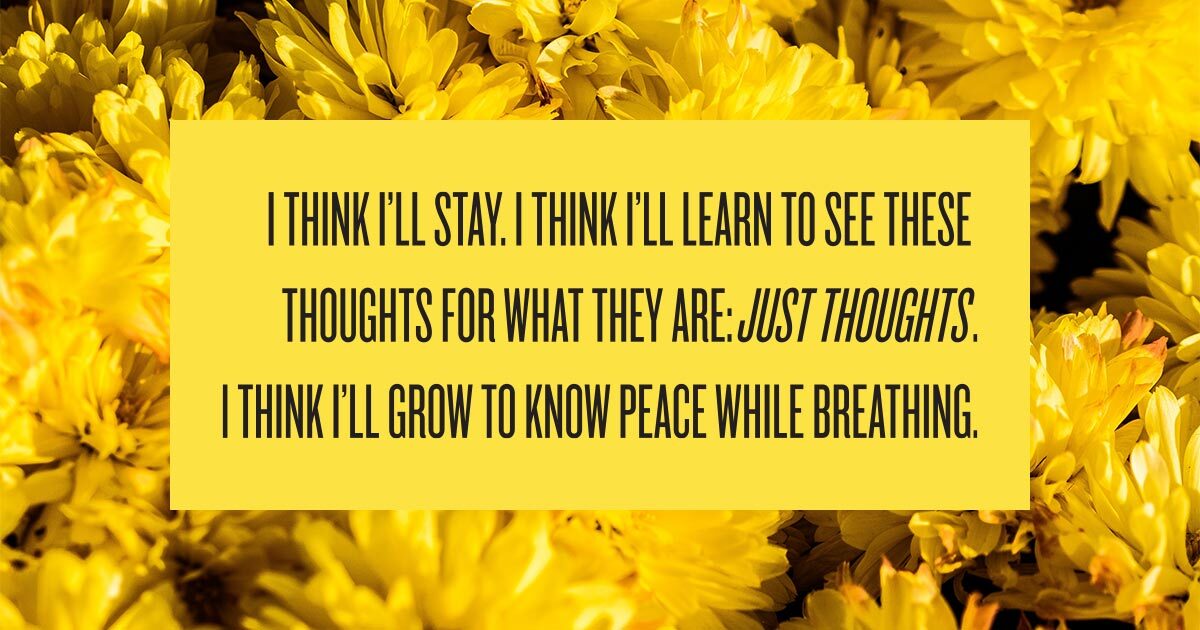 Could I have told my trusted, accepting, and present friend (who’s also employed by a different mental health organization), what was going on? Sure! Of course. If you were me, I would have encouraged you to do so in a heartbeat. But did I?

Narrator: She did not.

That night, while my friend slept soundly in her twin bed (it’s as glamorous and truly wonderful as it seems), I lay awake on an air mattress listening to the sounds of neighbors below blasting DMX, the night he died, until six in the morning. I could have easily chalked up my inability to sleep on the bass and beats or the lure of eavesdropping on strangers’ conversations, but we all know that wasn’t the reason for the sudden insomnia.

I tossed. I turned. I thought. I thought about that thought.

Eventually, my brain, instead of complicating things, did its job and supplied me with the start of a solution: text Claire, former TWLOHA Editor and really good friend. Claire, who has dealt with and understands these thoughts, too. Claire, who will still be awake at this hour.

But did I actually follow the trail of thoughtful bread crumbs?

A simple exchange of words. Of more thoughts. Of compassion and understanding. Of reassurance. Reassurance that this thought, and any future thought of the same nature, didn’t have to define me.

Just as I never correlate the value of others with the thoughts and challenges their brains supply—I, too, could be afforded that belief, that truth.

In turn, I recognized that my hesitance to share was steeped in fear. Fear that people would look at me differently. Coworkers, family, friends, strangers on the internet. I feared what people would think about the thought I had thought. (This is turning into a terrible example of Inception, so I’ll stop). Nevertheless, that realization led to facing and deconstructing that fear.

And this blog, this one right here, is perhaps me fully releasing the weight of said fear, of said pesky thought. Because while I can label the thought all I want with words like negative, dark, disappointing—when I boil it down to the basics, it’s just a thought.

A thought that came and (eventually) went. A thought that stayed long and gained more power than it deserved, but still, just a thought. Maybe that’s the part about living I struggle most with: Human existence involves so much thinking (and overly-engaged egos—but that’s a story for a different day). Fortunately (!), every thought can be replaced and followed by another. A new thought. Transformed and transmuted.

So if you are thinking these thoughts from time to time as well—hello! I’m here in this bleak space with you. But let us remember that we can go from thinking “Dying would be so much easier than living” and “You should swerve off this bridge” to:

We are human and we think. We are divine and we know.

You are not your thoughts. Suicidal ideation is not who you are. We encourage you to use TWLOHA’s FIND HELP Tool to locate professional help and to read more stories like this one here. If you reside outside of the US, please browse our growing International Resources database. You can also text TWLOHA to 741741 to be connected for free, 24/7 to a trained Crisis Text Line counselor. If it’s encouragement or a listening ear that you need, email our team at info@twloha.com.

Today was the first day of the rest of my life and I was spending it crying on a therapy horse named Ty, my tears mixing with the dirt that clung to him. I was beyond rock bottom.